At a certain point in my long personal history of wearing makeup (my nickname in college was Maybelline,) I became obsessed with a certain shade of lipstick: fuchsia.

But this fuchsia was not your mother’s pink. This was an out-of-this-world blend of purple and red.

The color fuchsia was  named after the color of the flower of the fuchsia plant, which was named for the from the 16th century German botanist Leonhart Fuchs.

According to Wikipedia, “the color fuchsia was first introduced as the color of a new aniline dye called fuchsine, patented in 1859 by the French chemist François-Emmanuel Verguin. The dye was renamed magenta later in the same year, to celebrate a victory of the French army at the Battle of Magenta on June 4, 1859, near the Italian city of that name.”

I just loved that color. This might have corresponded with my pseudo-new wave period, in which I wore mesh gloves with the fingers cut out and had my hair in a geometrically angled wavy bob.

To me fuchsia was like pink on steroids, and I loved the vivid shock of color on my lips. There was, at the time, an incredible lipstick made by Chanel called Fuchsia. I’ve looked for it again over the years since, and it does not exist anymore, sadly.

It was bold and strong. It made a statement.

I do still wear fuchsia, but now it is on my feet. I think I run a bit faster wearing these: 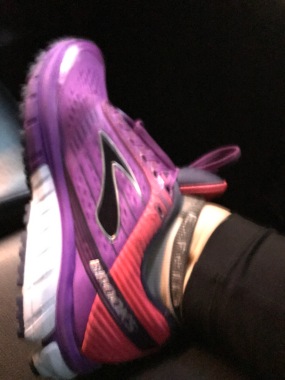