Growing up in the 70’s, my sexuality was shaped by what are now considered to be pretty tame resources.

Despite there being many women who were battling for my future and the future of many young girls like me against the woman-as-sex-symbol stereotype, I remained steeped in the cultural and mass media imagery, messages and attitudes that kept that stereotype alive and well. And boy, did it all do a number on me.

I grew up in Houston, Texas, in a mostly white, middle class neighborhood.

Other than my brothers and the time this one guy was driving around the neighborhood without pants on, fondling himself, asking kids for directions, who I had the misfortune of being “exposed to,” I was not exposed to male nudity as a child.

So much so that the “me” in the sentence above and “my body” became synonymous in my mind. I WAS my body. My body was me. As in, I based my entire self worth on my appearance and whether or not I felt men were attracted to me.

(I still struggle with this encoding. But I digress. More to come on that later.)

But we had magazines. Playboy and Hustler. Others. It was the photographic depictions of women in men’s magazines that primarily influenced how I saw myself as a woman.

My first memory of seeing and being influenced by a photo of a naked woman was actually a record cover, and this woman was not exactly naked. It was the cover of Herb Albert & The Tijuana Brass album “Whipped Cream and Other Delights” (1965.) 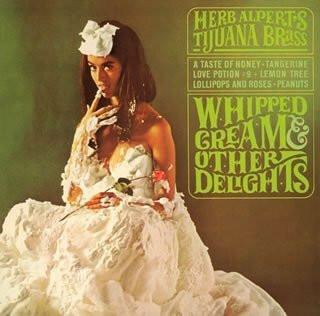 This was one of my parents’ favorite albums to play. I heard it often from an early age, and I loved dancing to the music, making up dances to the songs, which were saucy, sexy jazz concoctions.

But more than that, I was obsessed with the woman on the cover. I was attracted to her. (Maybe it was the appeal of the whipped cream. I was already way too into food: my eating disorder was gesticulating already.)

But it was more than that. On some level, I knew she was considered exciting, attractive and desirable, and I wanted to grow up to be just like her.

Also, TV shows such as “Love, American Style” Rowan & Martin’s “Laugh-In” were popular during my early years. Both had racy sexual references and innuendo and young women dressed in sexy outfits. From these shows, I learned that if you were sexy and young, you got positive attention from men. Think young Goldie Hawn dancing in those strobe lights in that green bikini with her painted body. The young women on the show actually wore babydoll dresses and Mary Janes because those were in fashion. Talk about confusing messages!

True story: If little me was asked at the time (when I was 4 or so) what I wanted to be when I grew up, I said “a go-go dancer.” I even had little patent white go go boots at 3!

These were my role models. This was the kind of woman I wanted to be!

Later, I found my brother’s girlie mag stashes and would go in when they were out to pore over them. I was fascinated by the women’s bodies, so different than mine. I knew that I fell way short, but I remained hopeful that maybe someday, with enough hard work, I could create a body close enough to rate some man’s favor.

When I was old enough, I started to read the articles (yes, I really did) and the infamous “Letters to Playboy.” These were my education in what was interesting to men about women. Through them, I discovered what men really thought about women. What they really wanted of us. And it all had to do with our bodies.

I learned that I was here to be attractive to men. That what I looked like and how attractive men found me was my purpose on this earth. That there was little value to me other than my sex appeal, and that if I wanted any happiness on this planet, I better work hard to be and stay appealing to men.

And so I did. I became the perfect female consumer. I bought into it all hook, line and sinker. The beauty products, the clothes, the way of being in the world.

I transitioned from my brother’s hidden away men’s magazines to the magazines of my adolescence. Though they were women’s magazines – Teen, Cosmo, Glamour, to name a few – the messages of their content were actually perfectly aligned with the former’s messages about the female role in society. In these magazines I found my road map, the formulas for winning and keeping a man, 100 ways to keep him satisfied in bed, and how to stay looking young and sexy forever.

Every issue of these magazines had different versions of these same themes, over and over. (And if you buy these kinds of magazines today, they still do.) And I bought them and bought into them all, every time.

How I related to boys and then men was all shaped by that early imprinting. I look back and feel like I didn’t really get to have real relationships with men (and women — since they were always the competition for the men) until much later in life. Because through all my dating and early relationships, I was living from the outside in, trying to be the women I had seen in those magazines pages. Trying to find and live the life promised to me in the ads in the magazines and on TV if I succeeded in making myself into one of those women in the pictures.

It took several years after moving to NYC as a young woman for me to learn how to leave my apartment without make up on.

It has taken many more years for me to unravel all of that social and cultural conditioning to find within my own idea of being a woman, of my own sexuality, of what I feel is my intrinsic value and purpose on this planet. It turns out, none of it depends on what men or society think of how I look.

It has been a tough going, this “unlearning.” I was thoroughly brainwashed. I drank the Koolaid. Despite years of hard work to reprogram myself, I still find little pockets within me that harbor beliefs like that Victoria Secret models are better people and deserve more than women like me. Or that if only I looked like this model or that model, my life would be perfect. Little pockets of self-hate that dismiss my worthiness as a human because I do not have large boobs and perfect thighs.

There’s still a part of me that is scared writing this blog post. That I will be labelled as “ugly” just thinking these thoughts/going against the grain.

I take those parts by the hand when they reveal themselves to me and I whisper the truth in a loving tone and tell them I am so sorry they have ever felt anything less than beautiful just as they are, inside and out.

Today, I try my very best to love my real body. I pour my resources into that. (I no longer buy those magazines nor do I need they ideas they sell.)

I love being in my body, and I love my awakening true sexuality. I love feeling desirable. (Who doesn’t?) But I no longer seek to feel this feeling from outside of me.

Today, feeling attractive and desirable is on my terms, made from an internal collage made out of my true essence  – what I like and feels good to me. This inner imagery replaces the old template.

There is no longer a buxom babe at the centerfold of my spirit, beckoning to me with promises of happiness and fulfillment if I am able to become her.

There is me, and the unique beauty that I bring to the world this time I am here.

Like many women my now-age, I look back at the loss of all that time trying to be a sex symbol as a tragic loss of my life’s precious energy.

I waste no more such precious time today.