Commit yourself to a mighty purpose.

I was saved, in large part, by reading and acting.

Growing up, my friends, my hope, my pleasure, my education all came from what I watched and read. As this was before the internet, this meant books, magazines, television shows and movies.

I had friends, sure. And a family. But I didn’t trust most people, with good reason due to early trauma. So I turned to other resources for help. To what was available to me as a child: books and television.

Through them, I could enter into other worlds and become a part of them. This saved me from the intense loneliness I felt, the extreme “otherness.”

I have no doubt that were it not for books and movies, I would have descended into a kind of madness that might not have turned out so well.

Fortunately, I had a library and a television at my disposal. They brought me works that gave me hope that another life could be made for myself. They gave me company. They gave me connection.

Today, as I navigate my life as a performer and as a writer, I can think of no higher purpose for myself than to create work that can do the same for someone else.

I am on a never-ending quest to examine and understand both the light and the dark sides of human behavior. I’m drawn to works that explore and celebrate the human spirit. Stories of how people rise above the problems of life and the human condition to make change and follow their hearts. I have a soft spot for the seemingly ordinary moments and people in life: the underdog; the unsung heroes; the quiet, small moments that can sometimes hold a lifetime.

It’s my mission to collaborate deeply and bravely as an actor and singer with all of the people who make up a production, so that together we can create stories to inspire, educate, elicit, and evoke. To wake people up so that they may live life more fully and authentically and to embrace their lives.

I also volunteer as a reader with SAG-AFTRA Foundation’s BookPALS program. I read storybooks to kindergartners in hopes of sparking a lifelong relationship between children, reading and books that I hope will help them navigate the murkier waters of growing up, of life.

That is my mighty purpose. What is yours? 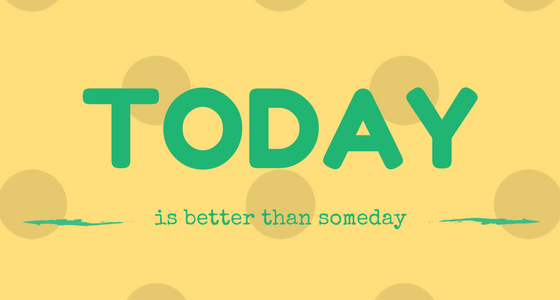 If you are old enough to get the reference of the title of this blog, you may share my opinion on the word “someday” because you’ve lived enough days to have noticed a few things.

If not, here’s some context. Will Robinson was a character on the series “Lost in Space” that ran in the 1960’s. It was long in reruns by the time I watched it: my high school friends and I would watch it on Saturdays, hungover, laughing at the campy melodrama. It had a robot in it, and in one particular episode, the robot warned Will of impending danger. (I also remember one episode where I think the robot actually said “take a chill pill” too, but we might have been playing a drinking game then so who knows if that really happened.) But I digress.

I believe that there are some words and concepts that are dangerous. “Someday” is one of those words.

An adverb, it is defined as: at some time in the future. As in: I know someday my whole family will be together and happy.

The problem happens when you start living so much for “someday” that you stop living this day.

I know firsthand that it’s possible to live from a deeply buried “someday” mentality and not even realize it. To live floating so much on that hope of the ever-elusive day in the future that life becomes the way you so desperately want it to, that life becomes a stream of yesterdays that weren’t really todays at all because the siren call of “someday” muted the music of the moment. I couldn’t even see what was because I was so fixated on and attached to visions of what I wanted life to be. I landed shipwrecked on the boulders of la-la-land, which before last year used to be a term that described “a fanciful state or dreamworld.” To put it another way, I awakened to the ugly and hard truth that I was way off course.

Once I realized that I was living from this hidden “someday” philosophy, after the shock wore off, and the anger, I had to forgive myself. After all, I was conditioned to live the world of “someday.” I grew up on fairy tales filled with songs like “A Dream is A Wish Your Heart Makes.”

And “Someday my Prince Will Come.”

I literally took these songs to heart, and they shaped my view of the world.

I am not blaming Disney! (But there is something to be said about the powerful affect of replaying songs hundreds of times. Don’t they use that technique to break prisoners? Isn’t that a kind of brainwashing?) I love those songs.

But they promise. And “promise,” like “hope” and “potential, ” are words and concepts that can be used for the better or for the worse. They are potent. They are to be measured for use.

These days, I watch myself. I steer myself away from using words like “someday.” I practice gratitude for today, this present day. For what is, not what I wish will be. Yes, I have wishes and dreams. But I also have goals and action plans. I am not adverse to a little hope in my heart. I love me a Disney movie and sing those songs right along with the best of them.

But I live in today. My yesterdays are well-lived and appreciated. My tomorrows are what my todays become. They are the result of today, not the point of them.

My “someday” is now.

Inspired by The Daily Prompt: Roots

Growing up in the 60’s and 70’s, television was a profound presence in our home.

My earliest memories are of hearing the word “Watergate” being discussed on nightly news. I don’t recall images or specifics, but I do remember wandering through the room and the adults being very interested in the TV screen.

I remember loving Romper Room with every fiber of my being, awaiting the day when the hostess would say my name as she held her magic TV mirror up in front of her face at the end of the show, calling out to little viewers in their living rooms as if she could rally see us there. (If you are too young to have any idea of what I am referring to, this is what I am talking about.)

But the biggest television event from my youth (pre-MTV that is) was, hands-down, Roots.

Roots was a 1977 miniseries based on a book written by Alex Haley. It was the story of African teen Kunta Kinte, brought to America to be enslaved, and the generations of his family and eventual emancipation.
A remake was made in 2016, and it once again became a television event. But the impact it had in 1977 can never be repeated. It was a different time.
In 1977, it was pretty huge that network TV was devoting so much time to an African American story. And we didn’t have the internet. Our cultural exposure was limited to television, films, art and books. As a young person, television was pretty much all.
And to my middle class, fairly all-white community, Roots brought to full technicolor glory some of the stories that had only been read about (barely and I am sure very biased-ly) in our history books.
I remember clutching pillows and crying, feeling outrage and shock at the outrageousness of the treatment of Kunta Kinte and his family. My friends and I talked about what we saw on-screen at school the day after the episodes. It opened our little minds up to whole other realities of our history.
According to Wikipedia: Roots received 37 Primetime Emmy Award nominations and won nine. It also won a Golden Globe and a Peabody Award. It received unprecedented Nielsen ratings for the finale, which still holds a record as the third highest rated episode for any type of television series, and the second most watched overall series finale in U.S. television history.
Apparently, the making of the miniseries was quite controversial in that the executives are afraid it would bomb. The Museum of Broadcast Communications recounts the apprehensions that Roots would flop, and how this made ABC prepare the format:

Familiar television actors like American [sic] actor Lorne Greene were chosen for the white, secondary roles, to reassure audiences. The white actors were featured disproportionately in network previews. For the first episode, the writers created a conscience-stricken slave captain (Edward Asner), a figure who did not appear in Haley’s novel but was intended to make white audiences feel better about their historical role in the slave trade. Even the show’s consecutive-night format allegedly resulted from network apprehensions. ABC programming chief Fred Silverman hoped that the unusual schedule would cut his network’s imminent losses—and get Roots off the air before sweeps week.

All important to examine today, and I am sure there are wonderful articles that analyze and explore such things much better than I can, but I didn’t know any of that then.
Then it was just a really riveting and important piece of television, one that told the stories of people and of a time in American history about whom I knew very little about up until that point.
I am so grateful for that. Historically accurate or not, it brought into our living room and into our classrooms another way of understanding who we were, where we had come from. It was a powerful use of the medium of television, and it opened up more than a few minds, I hope, to considering more than just what we had been told about America up until that point.
May there be many more “Roots”-inspired works to come. Maybe now more than ever we need such powerful television to be created.
#Roots #television #powerfulstories